There are plenty of mysteries out there that we have yet to receive any actual answers for, and while the great majority of them are still left unanswered, there are also plenty of them that we can finally bring light to by simply asking the right questions in the first place.

This is why for today we decided to answer a question that has been on pretty much everyone’s mind as soon as they saw their glorious four-legged friends lean their heads down and close their eyes for longer periods of time.

The question at hand is, do horses sleep standing up and more specifically, why do they do this if it does happen? Let’s start off with the basics.

Do Horses Sleep Standing Up?

The actual answer to this question is a lot harder to process than you may realize but it’s not without its reasons. In fact, it can easily be explained even though it is a very strange practice to begin with.

So, just to reiterate, horses DO sleep while standing up, in fact they take regular naps even when you don’t realize it as they just close their eyes and take short snoozing breaks every couple of minutes if they are very tired or bored.

Even so though if you know anything about horses or if you’ve ever owned a horse to begin with then chances are that you have seen your four-legged friend lying down during the late evenings as well.

So, which one is it? Do they sleep lying down or do they sleep standing up? It actually fully depends on how safe the horse is feeling at the time and even more specifically on how tired they are.

Standing Up is Tough

The main reason as to why your horse snoozes so much while standing around is because they actually take a very long time to wake up properly, and as such they would rather quickly close their eyes, get a few minutes of rest then wake up instantly and be ready to gallop away at the sight of danger.

Your horse is nowhere near as light as you may think, we are talking about a majestic 1,000-pound creature here that is also not generally known for being able to stand up instantly.

As such, your horse will prefer to sleep while standing up just so that it can quickly gallop away, if something comes charging at them. On top of that they also find it very difficult to stand up on ground that is slippery or too soft to the touch.

Imagine you are a 1,000-pound creature and you couldn’t use your arms to lift yourself up off the ground. That is the main reason as to why they would much rather just stand up and doze off, as opposed to sleeping on the ground like most other animals would do in that case.

The second reason as to why they would do this is as we mentioned previously, the constant fear that a predator may be lurking around them.

The only way that a horse can protect itself against a serious threat is by running away from it or by kicking it. Guess what though? If they are lying down, they are practically defenseless for as long as a whole minute before they can get themselves back up, depending on the ground they rested on.

On top of that they are also very easy to take down if they are lying on the ground because their heads and subsequently their neck is in full view and ready to be chomped in an instant.

So, for the most part, horses would rather take the time and sleep while standing up just so that they can assure the fact that they have a fighting chance in case a predator is lurking around them.

This may seem very uncomfortable to us, but for a horse it is a lot better than lying down, and being surprised by a pair of sharp fangs to the back of their throat.

Lastly, if they do just snooze, they can instantly wake back up and the more sudden their waking up is the more adrenaline will be pumped through their bodies which will give them an even better fighting chance.

Don’t Horses Get Tired Standing Up?

If you haven’t really been paying attention to your horse this whole time then chances are that you didn’t even realize that they had been sleeping all along.

So, you could be looking at them thinking “do they never sleep?” and you’d be mistaken. Horses actually generally sleep far longer than humans do, but they do so in shorter intervals to make sure that they are safe and sound while they do so.

These snoozes can last anywhere between a couple of minutes and a couple of hours and as soon as they wake up, they can fall back asleep and get right back to dreamland if they feel like it.

The reason as to why they can do this in the first place is because of a little something called the stay apparatus. This essentially refers to their special arrangement of muscles and the parts that keep the muscles and bones together.

What horses do here is they actually stand on three legs at all times, while the fourth one is resting, and they continue to switch between them to make sure that they never get too tired and fall down altogether.

Even so though, your horse will still need its rest time so after all is said and done, if they are tired enough, they will need to lay down and sleep properly for the rest of the evening.

If your horse actually does this a lot around you then you should take it as a good sign since this means that the horse trusts you with its life and more specifically that it believes that you will protect it in case of any danger.

It is actually very cute to see your horse lay down around you and as such you can always tell if the owner has been good to their horses if they take the time to lay down next to them or around them to fall asleep.

How Can I Make My Horse Trust Me More?

If you want your horse to actually live a happy life and not have to be sleep deprived the whole time, you will need to help your horse realize the fact that you are not going to hurt him (or her) and more specifically that they’re safe around you.

One of the best ways you can do this is by making sure that you do not scare or disturb your horse while they are just hanging around you. The less noise you make and the gentler of a person you are around them, the higher the chances of them actually trusting you.

On top of that you also should make sure that your horse has a lot of space to roam around in – you don’t want them to feel claustrophobic about their surroundings.

That may sound a bit ridiculous at first glance but trust us, horses can feel intimidated if they live in enclosed spaces, and even more so they can feel threatened if you keep them locked up the whole time.

As such you should spend plenty of time with them in open spaces, so that they can rest whenever they feel safe, and let you know by doing so that they trust you enough with their own safety.

So, what have we found out today eh? We did gloss over the fact that not only do horses sleep while standing up but they can also sleep while lying down as well.

The reason as to why they don’t do that so often around you is more often than not the fact that they don’t trust you around them and more specifically they fear that they will be attacked by a predator at random intervals so they would rather sleep while standing.

They do this for their own safety for them most part since they take a longer time to actually get up and get ready to run from danger and they need every second possible if they want to ensure their own safety.

While sleeping while standing is not inherently bad for the horse, you need to keep in mind that your horse will eventually need to sleep while lying down as well and if you want to encourage that you will need to be a lot gentler with it and more specifically you will need to reduce all of the noise to a minimum.

It takes a very long time to create this bond between you and the horse but trust us when we tell you that it’ll be well worth it by the time that it comes through because your horse will instantly become a pivotal part of your family that you will not want to be separated from anytime soon. 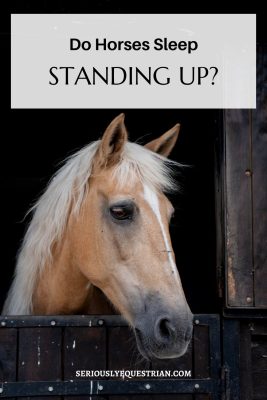