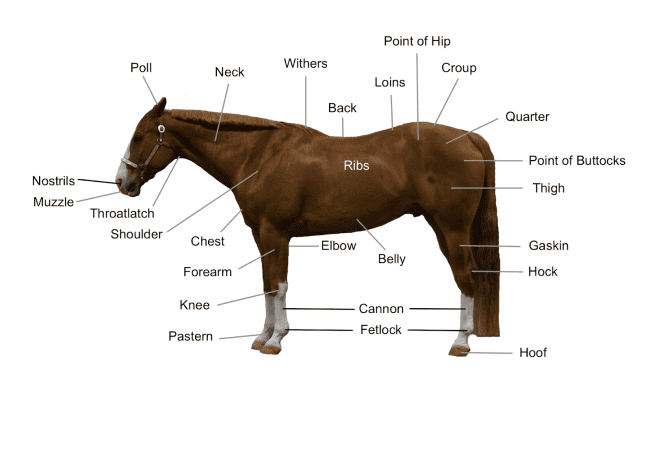 The chances are that you may know the name of some if not most of a horses body parts. Knowing the body parts is key to good horsemanship and everyone who cares and regularly interacts with horses such have a basic understanding of the main parts of a horses anatomy. In the Horse Diagram below you can clearly see these main parts along with a example explanation below.

A horses head and neck should be in proportion to their body.  The base of the neck should be level with the point of the horse’s shoulder with a clear and distinct chest area below. This allows the horse to be more flexible, and have better overall balance.

A balanced and proportionate body is key to proper leg structure and the overall quality of a horse. As you can see in the horse diagram above a proportionate horse is usually square. A square frame means that the length of the body is equal to the height from the withers to the ground. A well proportioned horse means that they are symmetrical on both sides of their body. A lack of symmetry will usually means that a horse is more likely to experience stress in one part of their body which will limit the horse’s ability to perform with move with ease.

The back of the horse extends from region behind the thoracic vertebrae and extends to the lumbar vertebra. A horses back is crucial to their ability to carry weight and it is the area on which a rider sits.

The legs of a horse are made up of a system of muscles, tendons, ligaments,  and connective tissue. This system works together to support horses weight when it stands up also works to diminish compression during movement which helps to horse to avoid injury to their limbs.