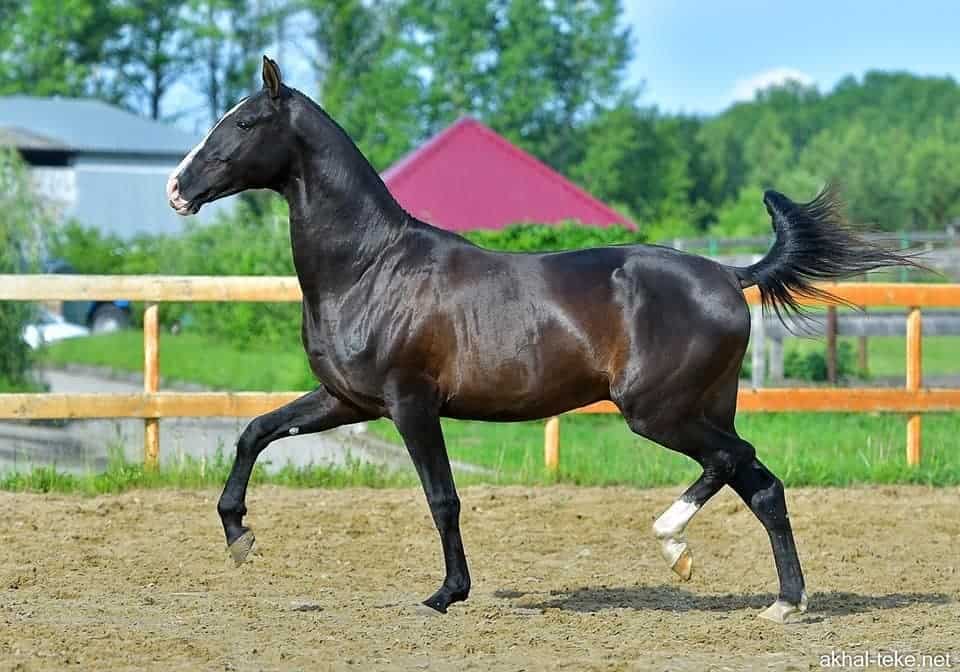 All horses are beautiful, stoic creatures that are interesting to behold and spend time with. However, some horses are renown for being unique and possessing interesting characteristics that one might not find in your everyday equine. One such horse is the Akhal Teke horse, an interesting breed that’s often known for its impressive, metallic-looking coat. The Akhal Teke horse is extremely rare in North America and is considered an endangered animal and has been placed on the Conservation Priority List.

There’s more to it than that, though. Here are some interesting facts you may not have known about the stunning Akhal Teke horse.

1. The Akhal Teke is the National Horse of Turkmenistan

The Akhal-Teke is a very popular figurehead in Turkmenistan, and is considered to be the national equine symbol. This makes sense, considering the fact that Turkmenistan is the region where the Akhal-Teke came from.

The horse has found its way into many different aspects of culture in Turkmenistan. It can be found on certain banknotes, on postage stamps, and is even a feature in their coat of arms.

2. The Akhal-Teke is an ancient sport horse

The Akhal-Teke is allegedly several millennia old, with some suggesting that it has been around for more than three thousand years. Interestingly enough, one of the old names for the horse was Nisaean – similar to Nissan, a popular maker of vehicles.

This is interesting because the Akhal-Teke was originally used as a race horse. It was referenced by a number of well-known historical writers, including Oppian, a Roman historian.

These horses were quoted for their impressive beauty, size, strength, and especially speed. This makes them ample race-horses, and they are still used for races in Turkmenistan.

3. Their history is debatable

The Akhal-Teke horse originated and was bred in a region where English is not the native language. That means that a lot of what we know about the breed hasn’t been translated, and that of which we do know may not have been translated properly.

In fact, the International Museum of the Horse says that a lot of what people believe about the horse is a result of improper translation. One popular belief, for example, holds that the breed originally came from Russia. This is simply not true and raises suspicions about other historical information that we have about the horse.

4. They preceded the Thoroughbred

The Thoroughbred – as indicated by its name – is considered one of the strongest influences in a number of horse breeds. The Arabian is most commonly cited as the ancestor to the Thoroughbred, but there is some suggestion that the Akhal-Teke is a factor as well.

The Byerly Turk, one of the original three horses that was involved in the development of the Thoroughbred, was actually an Akhal-Teke. These fascinating horses are among the oldest racing breeds and have thus had a marked impact on many horse breeds, especially those in the Middle East.

5. The Akhal-Teke is impressively durable

The Akhal-Teke originated in the Middle East, a region where living conditions are often a lot tougher than they are in the West. Natural resources, including food and water, aren’t nearly as abundant in these regions as they are in other areas on the planet.

This means that things living in these areas – including both people and horses – have to adapt to these difficult conditions. That means that they will develop strength, endurance, and other aspects that allow them to thrive.

There is a story that follows a group of Turkmen horse-riders who rode their Akhal-Teke horses a total of 2500 miles in 84 days – just under three months.  Thisi trek, which happened in 1935, involved a 235-mile trek in which the horses didn’t drink water.

Their durability may have something to do with their thin skin, which is an adaptation  that may have emerged as a result of spending so much time in the desert.

6. These Horses are Decorable in Turkmenistan

The people of Turkmenistan are very proud of the Akhal-Teke horse, as you can see with the horse being an aspect of their national emblem.

In addition to this, the Turmen like to show off their horses by decorating them lavishly. Many people like to dress up their horses with drapings or tack. A particular type of decorations that are used on these horses are referred to as allagash, and they are generally made with valuable jewels or minerals including gold and silver.

Funny might not be the best word word to describe the way that the Akhal-Teke walks, however, there’s little doubt that they have a unique and unusual way of moving about.

One study was led by Phil Case, a man who was known for bringing this breed of horses to the United States. His study revealed that the horses don’t follow a standard two-beat motion like most horses.

Instead, these horses move by stepping down with each of their individual feet. This is much more similar to the way that other 4-legged mammals move, giving these horses a much smoother trot – this could possibly influence the way that they are able to move so quickly and effectively.

8. Their metallic sheen is fascinating

The horses are well-known for having a unique, high-gloss coating that makes them look a little bit metallic. All colors of the breed are known for being shiny, and the hair can accentuate and add this gloss to other colors as well.

Sometimes referred to as The Akhal Teke Gleam, many believe that it is a result of genes – especially since the gleam is more prevalent in some breeds than others.  This, however, isn’t the case.

There is quite a lengthy explanation as to the real reason behind this, but it has to do with a unique structure of their hair. Some of these hairs display certain scale patterns under the microscope, and it’s believed that these scales  are responsible for the sheen. 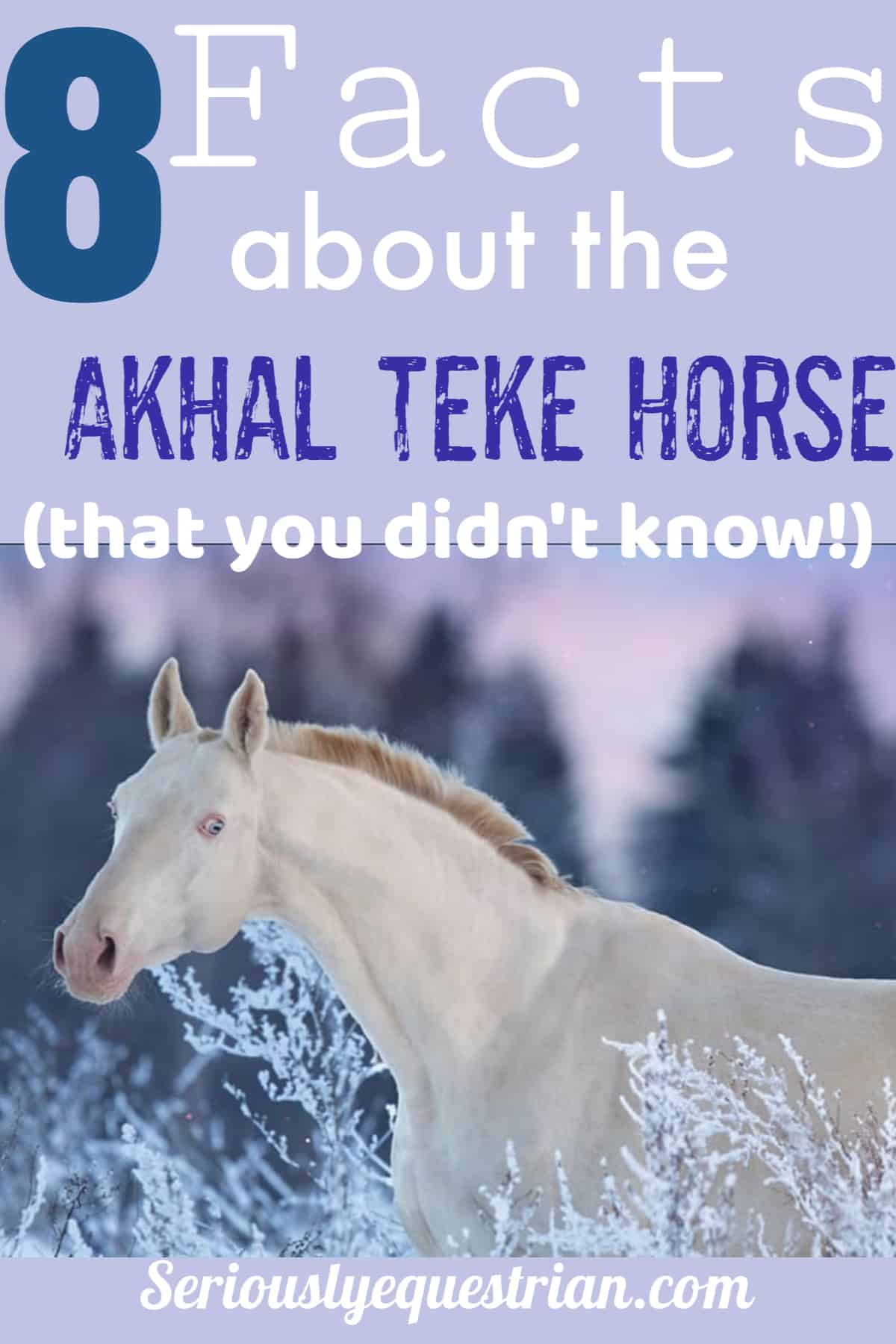 1 thought on “8 Facts about the Akhal Teke Horse”