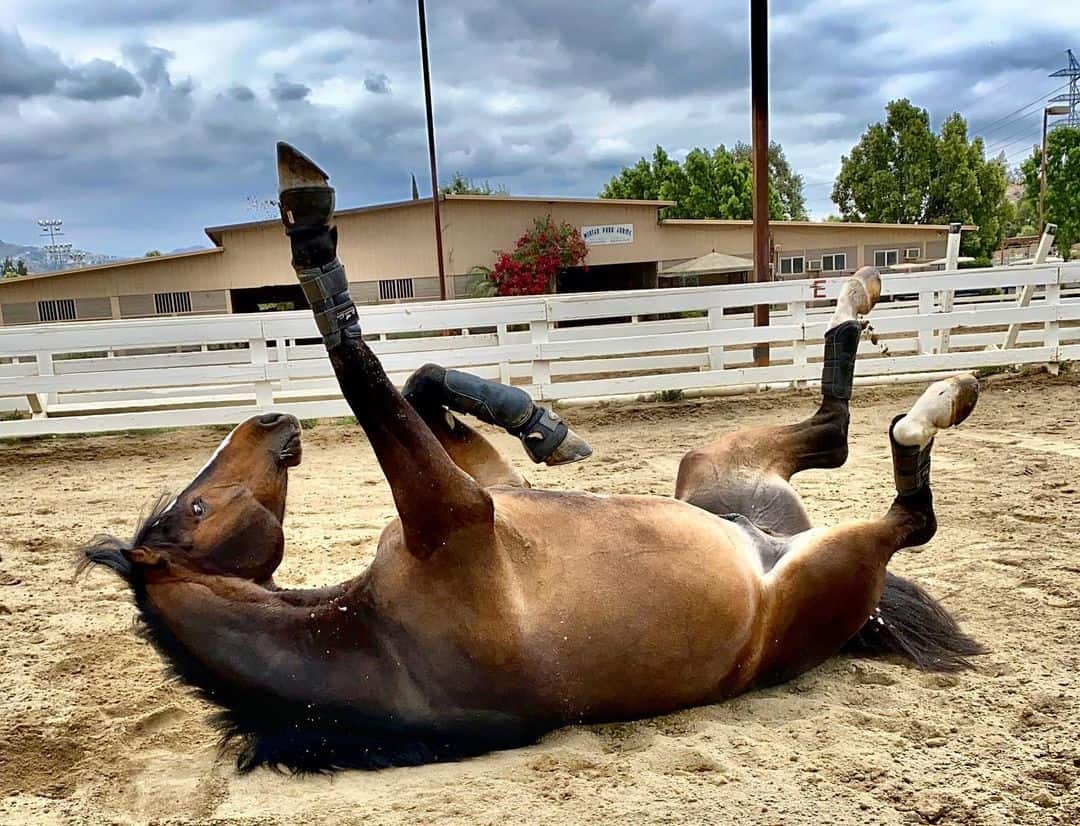 If you spend enough time around horses, you will have noticed one of their favorite activities is having a good roll. A nice dusty part of the paddock or a muddy puddle is particularly appealing. Often to the horror of their owners who have just spent time getting them sparkling clean. Sand and fresh shavings also quickly send a horse into rolling mode.

So why do horses roll?

When they get turned out

The first thing many horses do when you turn them out in the paddock is head straight for their favorite spot and have a good roll. It is usually a particularly dusty or muddy patch of ground. These rolls are part of the horse’s natural behavior and happen for a few different reasons

Horses living or spending time with other horses have a pecking order. Rolling is a way of communication. Horses leave a scent on areas they claim as theirs to tell others information about themselves, such as their gender, age, and rank in the herd. If one horse rolls, it will often trigger the rest of the herd to take their turn.

If a field of horses has a favorite rolling spot and you are familiar with their herd dynamics, you’ll notice that the most dominant horse rolls last. That scent is the strongest, marking out that horse as the one in charge.

Insects, particularly in hotter weather irritate horses. Bites can sting and cause itchiness. Rolling in dirt or mud is a type of dust bath. The dirt coating the skin gives some protection against bugs. It also forms a layer of protection from the sun.

Rolling is a way for a horse to remove loose hairs and dead skin. You may notice an increase in rolling in the spring when heavy shedding occurs. The rolling action helps loosen the hair and relieve any itch it’s causing.

Speaking of itchiness, if a horse is hot and sweaty either from a thick coat or after exercise he will often roll. When a horse gets sweaty during exercise the tack can become irritating. It doesn’t necessarily mean there is something wrong with the fit of the tack. Think of how you feel after a run or time in the gym. You have damp, chilly, sticky clothes and can’t wait to change out of them.

Horses use rolling as a way to dry off. It helps remove moisture and fluff their coats back up. Often to the annoyance of owners who have just spent ages bathing them. Some horses, wet from the rain, will roll in their stable as soon as they come for the same reason.

If you’ve been confined to an office chair all day or just getting up out of bed, it’s not surprising to feel a bit stiff. The same goes for horses that spend a lot of time stabled or are in regular work. Rolling is an excellent way for them to stretch out their legs, backs, necks, and muscles that might feel a bit sore or stiff. It also acts like a massage.

Rolling for horses is just fun. It can be a sign of happiness and relaxation. You will often see horses just put in the field immediately go down for an excessive roll. Only to jump up and have a few bucks and squeals before settling down to graze.

When Should you be Worried?

Horses don’t only roll for fun or self-grooming. It can also be a sign that something is wrong, sometimes seriously wrong.

A young healthy horse should be able to completely rollover. Learn your horse’s rolling habits and ability. If your horse doesn’t roll over, he could have muscle or joint pain. It could be a sign that he requires therapy, such as physiotherapy or chiropractic treatment. Often after a treatment, you’ll notice that the horse can roll over again. So keep a note of your horse’s rolling behavior. Note that an older horse may no longer roll over due to the usual effect age has on their body.

It is also worth knowing that a horse may roll if they have colic. This is a serious situation. Horse owners need to be able to distinguish between normal and colic rolling. If a horse has colic, you may see two different types of rolling. One is a repeated up and down rolling. The other is a more violent, thrashing type of rolling. In both situations, the demeanor of the horse will likely show some kind of distress and they will look uncomfortable. Some colicing horses will look at or kick at their stomach in between up and down rolling. They usually won’t shake in pleasure when getting up from the roll and could be sweaty. It was previously thought that rolling during colic could cause an intestinal twist. However many vets claim this is a myth and that there is now evidence that rolling can actually be beneficial for a colicing horse. The movement can help release gas or blockage that is causing the gut pain.

If you suspect your horse is rolling due to colic or general discomfort then you should contact a vet ASAP. If they are rolling excessively and violently in their stable then you should also consider moving them to a safer space to avoid them causing injury to themselves.

Understanding why horses roll and knowing your own horses rolling patterns is important. When you know this you will quickly be able to discern between normal happy rolling and a horse that is rolling due to pain

Signs a horse is going to roll

When a horse is thinking of rolling, you’ll see some telltale behavior. This may be differ depending on the horse but in general they will follow a pattern. Many horses have a preferred rolling spot in the riding area or pasture that they will regularly seek out for a roll.

The first thing that happens is that he’ll drop his head to the ground and often walk in a few circles.  Then he will paw at the dirt or shavings to loosen up the ground and ensure that the ground is just right for the roll. Once they have found the right spot its just a matter of getting down there and going for it! 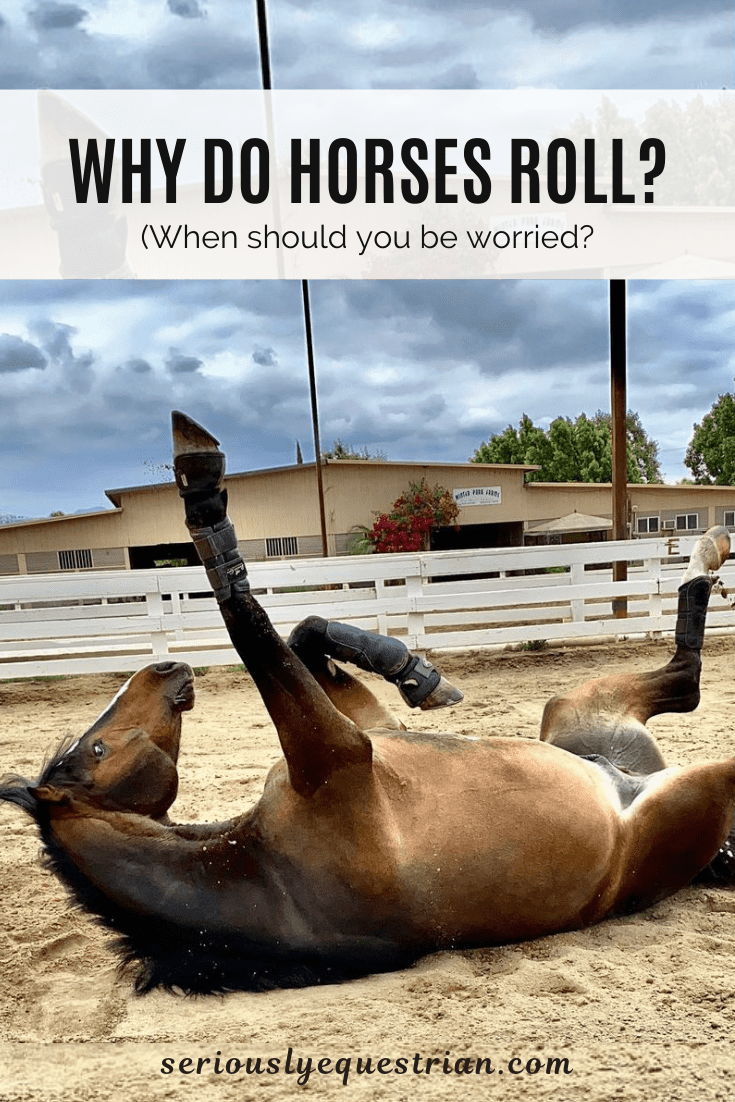