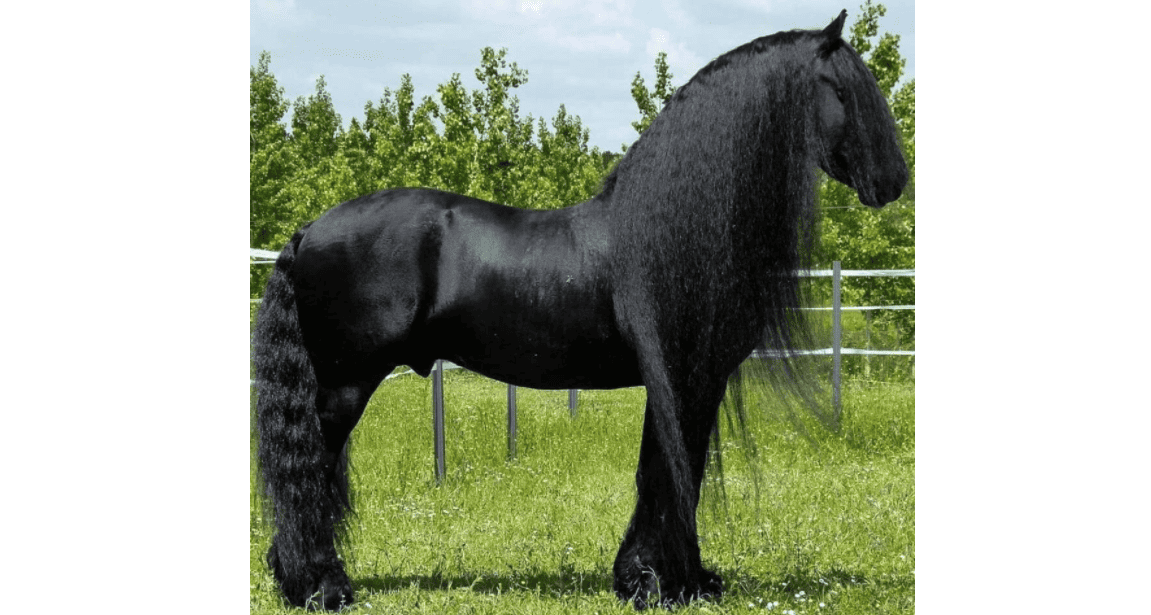 The Friesian horse breed has an undeniable presence. They stand tall and proud, making it very unlikely they would go unnoticed in a group of horses. Despite their bulky physique, the Friesian is graceful and light-footed in its movements. The Friesian is a popular and well known horse breed.

The Friesian originated in northern Holland, in the province of Friesland. The history of the breed can be traced to at least the 13th century. However, many think that the breed’s history goes much further back. There are several illustrations from as far back as the 11th century depicting riders on horses that look like the Friesian.

Like many horse breeds with a long history, the Friesian was originally a war horse. Their powerful, agile bodies and good temperament made them ideal mounts for soldiers. In the 16th and 17th centuries, Spanish Andalusian horses were crossed with Friesians, creating a lighter horse that would be more suitable for pulling carriages. In the 17th century, the breed was also seen in classical riding schools. From the 18th century, Friesians were popular for use on farms and carriage work, particularly for pulling funeral carriages.

Friesian horses played a significant role in the development of other horse breeds, including the Morgan, Fell and Dale pony, and Norfolk Trotter. In 1879, to protect the purity of the breed, the Friesian Horse Studbook of the Netherlands was founded.

Friesian numbers became so low in the late 19th and the early 20th century that the breed was at risk of extinction. A lack of motorized vehicles during World War II revived the breed. They were again needed to work pulling carriages and on farms. After the war, Friesians became popular driving competition horses. They also were used for dressage and in circuses. 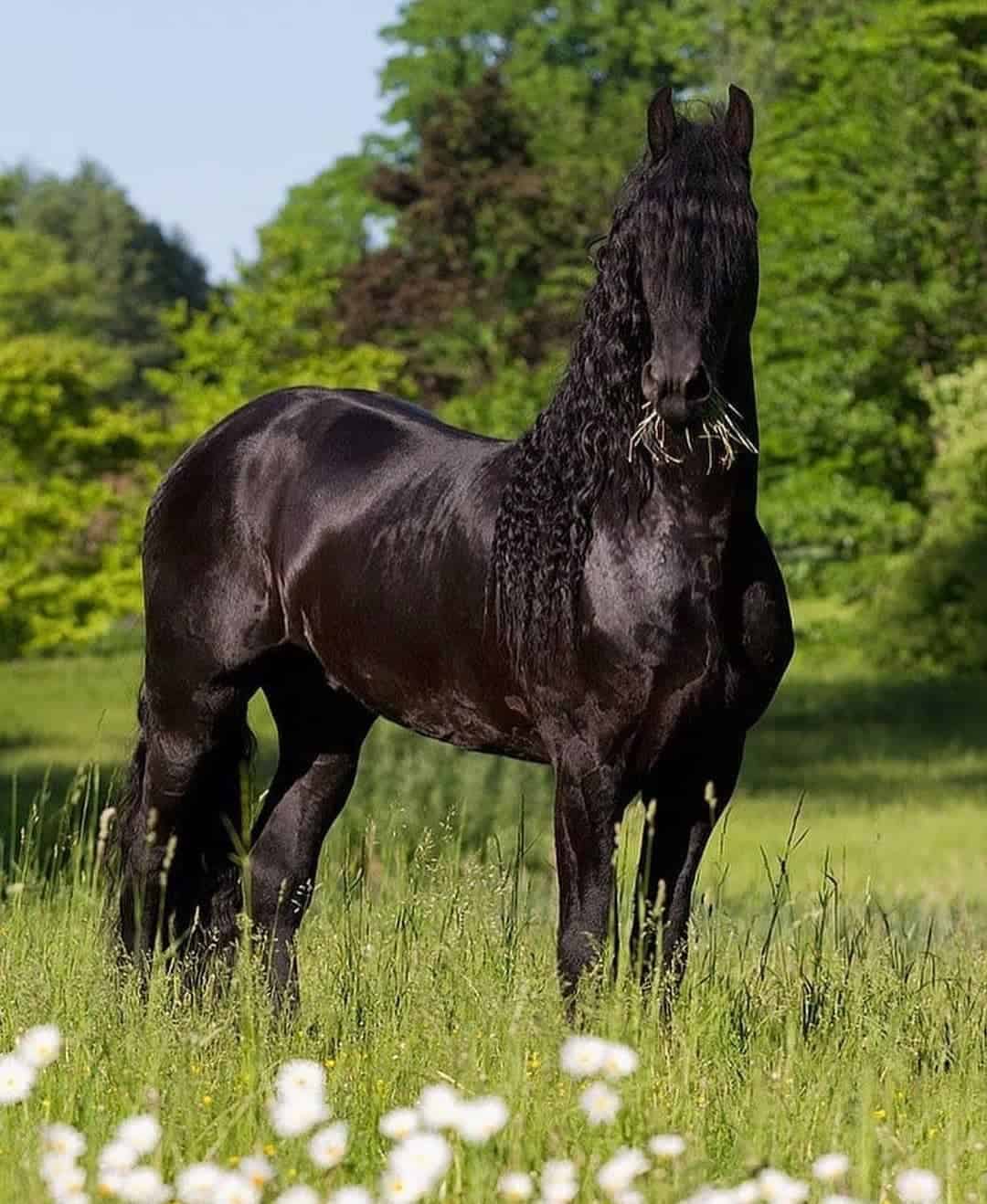 Nearly all Friesians are black but can contain a small bit of white on their face. A Friesian can be chestnut, but this is extremely rare. The breed’s height ranges from 14.1 – 17 hands. However, despite looking much bigger than they are, the average Friesian stands 15.3 hands.

The Friesian is not only recognizable by its color, but also its high set neck and high head carriage. The neck is arched, and the head has a somewhat roman nose, like the Portuguese Lusitano. Their bodies are extremely powerful with short but strong legs and wide hooves.

Perhaps the most distinctive features of the Friesians are its thick mane and tail. The breed is commonly presented with its mane and tail long and following. Additionally, they have feathering on their lower legs. They have large eyes and interested expressions. Finally, they are known for their light, high stepping movement in all gaits.

To be included in the breed registry, a Friesian horse must meet the strict movement, confirmation, and veterinary guidelines. There are two types of Friesian, the more old fashioned and heavy baroque build and the more modern lighter sport type.

One characteristic of the Friesian that makes the breed popular is its temperament. In fact, the breed is often compared to dogs. They have a playful, yet gentle personality that isn’t easily spooked. They are eager to please and intelligent, making them easy to train. However, they can be sensitive and are best trained with experienced hands, so they don’t become difficult. They are loyal and can form strong bonds with their humans.

The Friesian is primarily a driving horse. Their high neck carriage and flashy, high stepping trot create an elegant and majestic look for a carriage. However, today they are also used for a variety of disciplines, including dressage, trail riding, and as a circus horse. They are particularly popular film and TV horses, especially in anything with a fantasy or historical theme.

In general, the Friesian is best suited to lower level dressage, especially the baroque type. The modern, sport Friesian can have success at higher levels of dressage. It is not their movement that keeps the breed from consistently reaching Grand Prix dressage level but its confirmation. Their high set neck makes it difficult for the horse to create the level of true collection needed at that level. They would, however, suit the skills seen executed by the Lippizaners of the Spanish Riding School.

A Friesian has thick and long hair on its legs known as feathers. It also has a long and thick mane. To keep these in good shape they require daily grooming and extra care. To keep the mane and tail free from tangles it is adviseable to use a good conditioner and leave the hair in braids with daily brushing. It is also important to keep the feathers brushed and clean.

When washing the feathers, it is essential that you dry them properly with a towel or a hairdryer. Friesians are prone to pastern dermatitis, otherwise known as scratches. This occurs when moisture is trapped next to the skin.

During sunny days it is a good idea to put a UV fly sheet on a Friesian to prevent their coat bleaching. A good diet and color enhancing shampoo will also help keep the coat’s black color and shine. Friesians do better in a cold or cool climate as they can suffer from a lack of sweating, otherwise called anhidrosis.

During the early 20th century, when the breed saw a large fall in numbers, in-breeding occurred as a result of attempts to save the Friesian from extinction. Because of this, Friesians can suffer from health conditions.

The Friesian is undoubtedly a beautiful and striking horse that is attractive to horse lovers. However, even though they have good temperaments, they are not a breed for a novice. This is due to their high intelligence and sensitivity. If they are not trained correctly, it can lead to behavior issues. 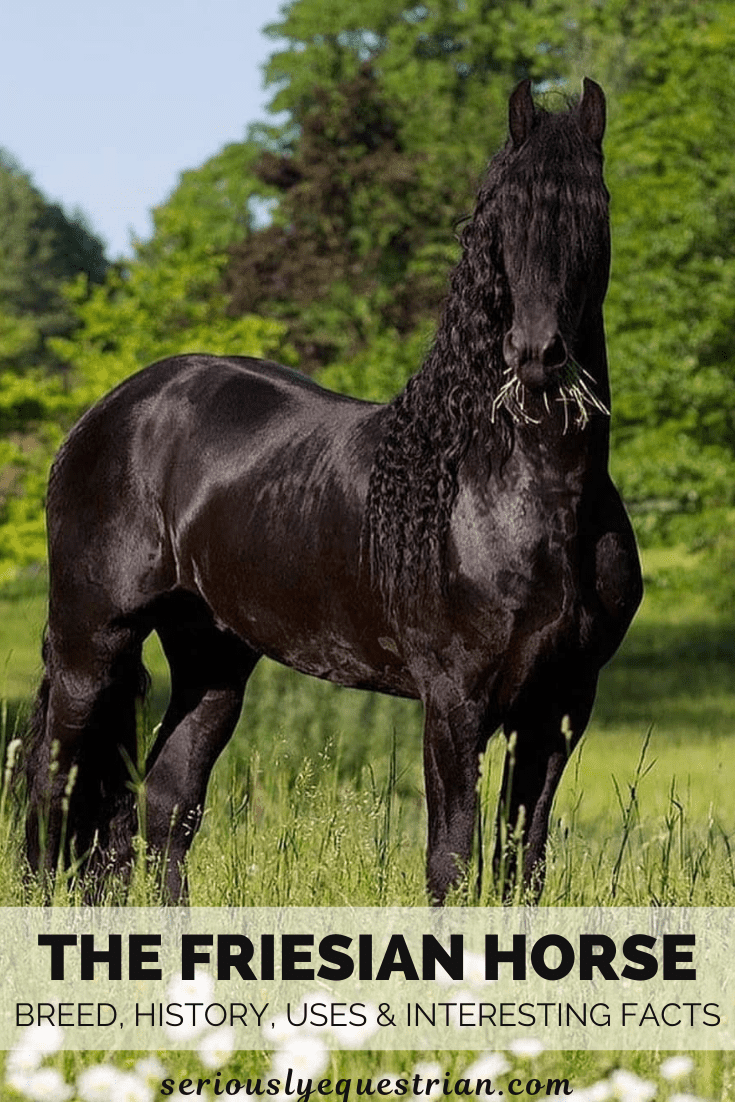