For approximately 5,000 years the horse has been an ever-present ally of humans. We have used horses to help build our civilizations and have consistently depended on them for agriculture, transport, war, and other uses. The increased level of mechanization since the  1930’s has since reduced this dependency. However the bond between humans and horses remains strong. This unique bond and relationship has been captured in writing throughout the years by many different people which have since become well known horse quotes.

Writers, historians, politicians, musicians, and film stars are just some of the people who have spoke about the amazing nature of horses. The following list captures many of the best known horse quotes.

“No hour of life is wasted that is spent in the saddle.”

“I’ve often said there is nothing better for the inside of the man, than the outside of the horse.”

“When you are on a great horse, you have the best seat you will ever have.”

“I can make a General in five minutes, but a good horse is hard to replace”

“God forbid that I should go to any heaven in which there are no horses.”

“Horse sense is the thing a horse has which keeps it from betting on people.”

“A man on a horse is spiritually, as well as physically, bigger then a man on foot.”

“No one can teach riding so well as a horse.”

“I am still under the impression that there is nothing alive quite so beautiful as a horse.”

“When I bestride him, I soar, I am a hawk: he trots the air; the earth sings when he touches it; the basest horn of his hoof is more musical than the pipe of Hermes. ”

“A pony is a childhood dream. A horse is an adulthood treasure.”

“What he loved in horses was what he loved in men, the blood and the heat of the blood that ran them. All his reverence and all his fondness and all the leanings of his life were for the ardenhearted and they would always be so and never be otherwise”
Cormac McCarthy

“There are many wonderful places in the world, but one of my favorite places is on the back of my horse.”

“We have almost forgotten how strange a thing it is that so huge and powerful and intelligent an animal as a horse
should allow another, and far more feeble animal, to ride upon its back.”

“The horse. Here is nobility without conceit, friendship without envy, beauty without vanity. A willing servant, yet never a slave.”

“In riding a horse, we borrow freedom.”

“No philosophers so thoroughly comprehend us as dogs and horses.”

“There is something about jumping a horse over a fence, something that makes you feel good. Perhaps it’s the risk, the gamble. In any event it’s a thing I need.”

“There is no secret so close as that between a rider and his horse.”

“There is no better place to heal a broken heart than on the back of a horse.”

“A horse doesn’t care how much you know until he knows how much you care. Put your hand on your horse and your heart in your hand.”

“A horse gallops with his lungs, Perseveres with his heart, And wins with his character.”

“…for there is no other feeling in the world to compare with it if one loves a great horse. It gives a thrill that nothing else ever can. It cannot be put into words, because words cannot express it.”

“Wherever man has left his footprints in the long ascent from barbarism to civilization, we find the hoofprint of a horse beside it.”

“And indeed, a horse who bears himself proudly is a thing of such beauty and astonishment that he attracts the eyes of all beholders. No one will tire of looking at him as long as he will display himself in his splendor.”

“The air of heaven is that which blows between a horse’s ears.”

“Courage is being scared to death but saddling up anyway.”

“His hooves pound the beat, your heart sings the song.”

“There is something about riding down the street on a prancing horse that makes you feel like something, even when you ain’t a thing.”

“Horses lend us the wings we lack.”

“In their eyes shine stars of wisdom and courage to guide men to the heavens.”

“I would travel only by horse, if I had the choice.” 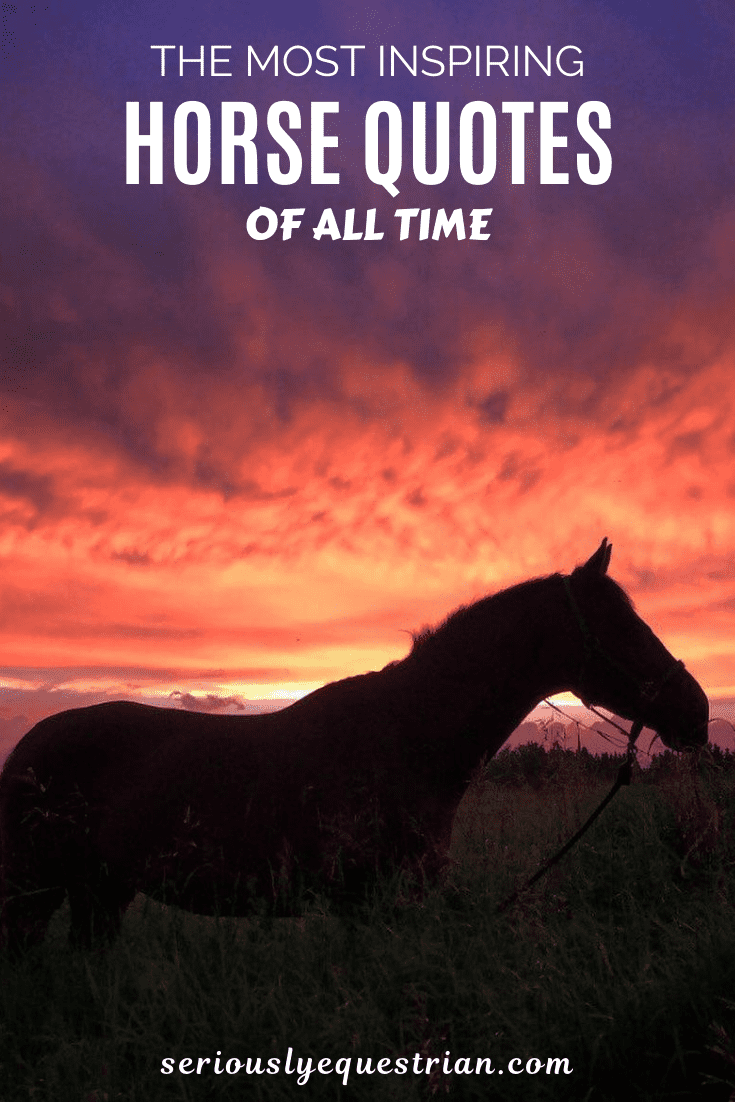