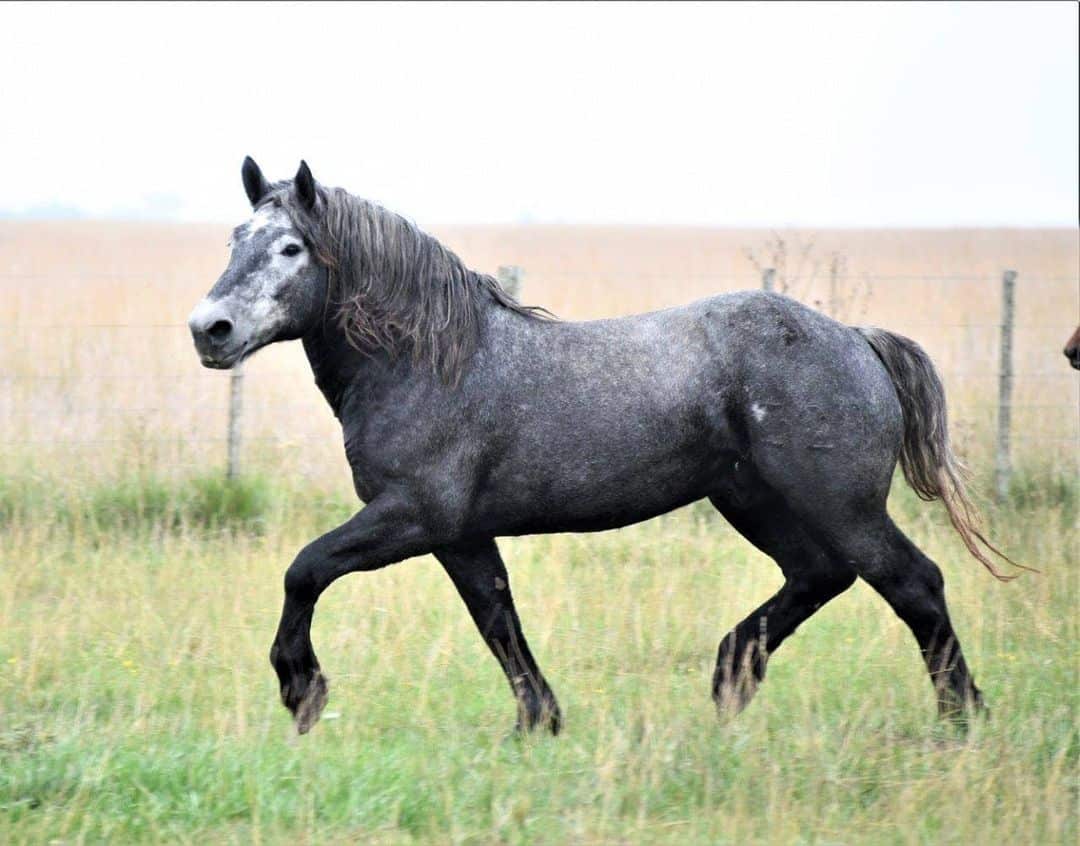 The Percheron draft horse is one of the most common and well-known draft breeds. Their large, powerful physique is at first intimidating, but they have wonderful, gentle natures. The Percheron’s willing personality makes it popular for many uses, in particular, pulling heavy loads and driving carriages.

Unlike other horse breeds, the development of the Percheron can’t be traced precisely. Most accept the theory that over several centuries a mixture of Arabian, native horses from Brittany, Barbs, and heavy Flemish horses all contributed to the Percheron. By the 17th-century, the Percheron was fairly established as a breed in its own right. This early version of Percheron was smaller than the modern version and was originally bred to be a warhorse.

By the 1850s, the Percheron was commonly found on farms, used for their strength and good nature to plow the fields. They were also used for pulling carriages and transporting goods between ports and trains. At this time, they were also exported to the United States, outnumbering all other draft breeds used there in the 19th century. When World War I started, France stopped exports of the horse, and the bred played a large part in the war.

In the early 1800s, the foundation for the modern Percheron was laid with the introduction of a stallion called Jean Le Blanc. It is believed that all modern Percherons descend from this horse.
After World War II use of the Percheron for agriculture and transport reduced greatly with the advent of tractors and other motorized vehicles. This modernization pushed the breed to near extinction.

Both US farmers and the French national stud, Le Pin, kept the breed alive. We have them to thank for having this special bred with us today.

Percherons come in a variety of colors but are most commonly gray or black. Other colors include bay, roan, and chestnut. French Percherons are only allowed in the studbook if gray. The breed is allowed to have white markings, but not in excess.

Percherons range from 15.1 to over 18 hands in height and weigh 1,100 to 2,600 pounds. French horses tend to be smaller and weigh less than their US counterparts. They are extremely muscular and cold-blooded. The horse has a small head in comparison to its body size, good bone with large knees, and powerful hocks. They have the most refined head and neck than any other draft breed.

Percherons have a thick, short, heavily crested neck, a short, strong back, and sloped, wide croup. They are considered second only to the Clydesdale in movement and have a bold, high action trot. The legs tend to be short and muscular, with the overall shape of the horse being boxy. 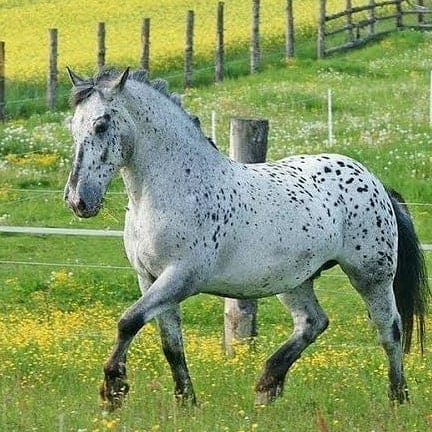 The Percheron has a gentle, willing temperament. However, they are not dull. It is the most energetic draft breed. The energy, combined with its willingness to work and please, as well as its proud, intelligent, character is why Percherons are such useful partners for work and riding. They have good minds that aren’t upset by lots of activity going on around them.

Because the Percheron is one of the most elegant draft breeds, their use isn’t limited to farm work. Today, you will see them carriage driving, both competitively, commercially, or for pleasure. If you enjoy fall hayrides or Christmas sleigh rides, you are most likely in the presence of a Percheron. They are also commonly used for logging as they can access areas tractors can’t. They can even outpower machines when a team is used to pull something.

Pulling isn’t the only job a Percheron can do. They also make good riding horses, though they are used less frequently for this. Their sensible temperaments and endurance make them excellent trail horses. Some Percherons have even shown a talent for jumping at lower levels. There have even been Percherons successful in dressage.

Percherons are often mixed with other breeds to add temperament and endurance. In Australia, they are often crossed with thoroughbreds to create police horses. The UK uses Percherons to create heavy hunters with good temperaments and increased height.

Interesting Facts about the Percheron Horse

● Unlike other draft breeds, such as the Clydesdale, Percherons don’t have heavy feathering on their legs.
● They have very thick manes and tails that are often wavy.
● Heinz created the Heinz Hitch Team in the 1980s to honor horse-drawn deliveries of the past. The team consisted of eight black Percherons.
● The US is home to more Percherons than any other country.
● The color gray was introduced to the breed in 1820 by two Arabian stallions.
● They make good riding horses for a beginner or timid riders due to their calm, sensible temperaments.
● A Percheron can reach a height of 19 hands.
● They need a lot of pasture time. The Percheron can get anxious if kept in a stable for many hours.
● Disney uses Percherons to pull carriages in their parks.
● A Percheron named Pecas starred in the TV series – Texas Rising.
● When they first came to the United States, Percherons were called Norman-Percheron. 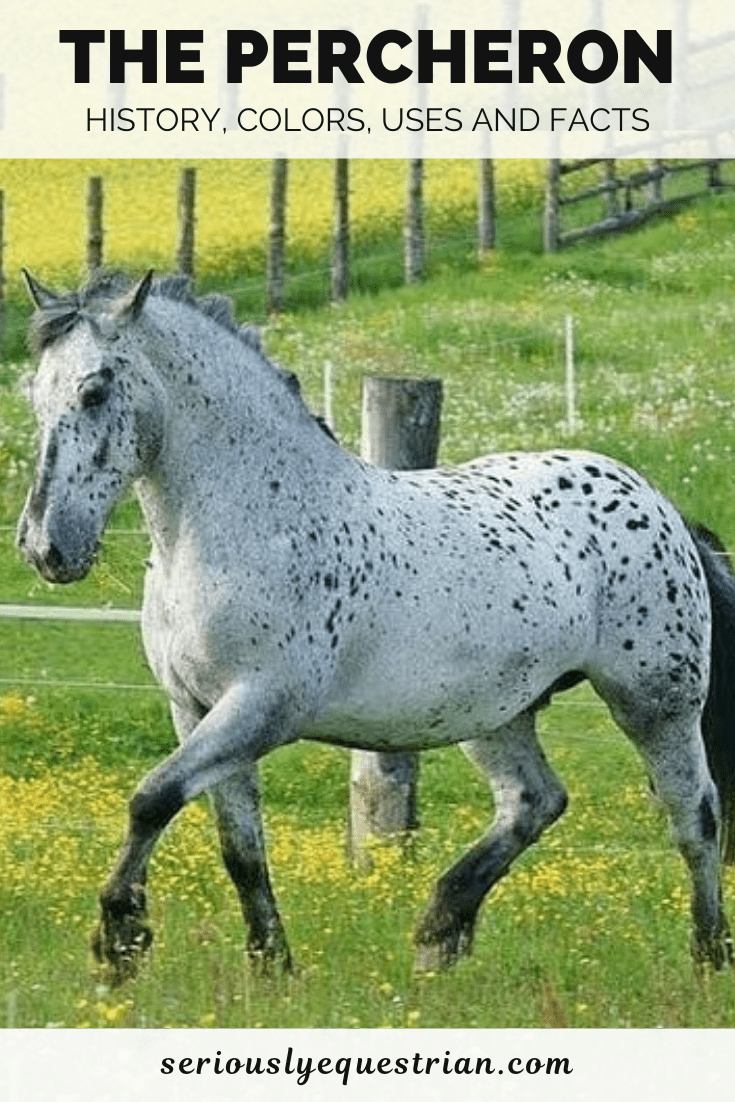