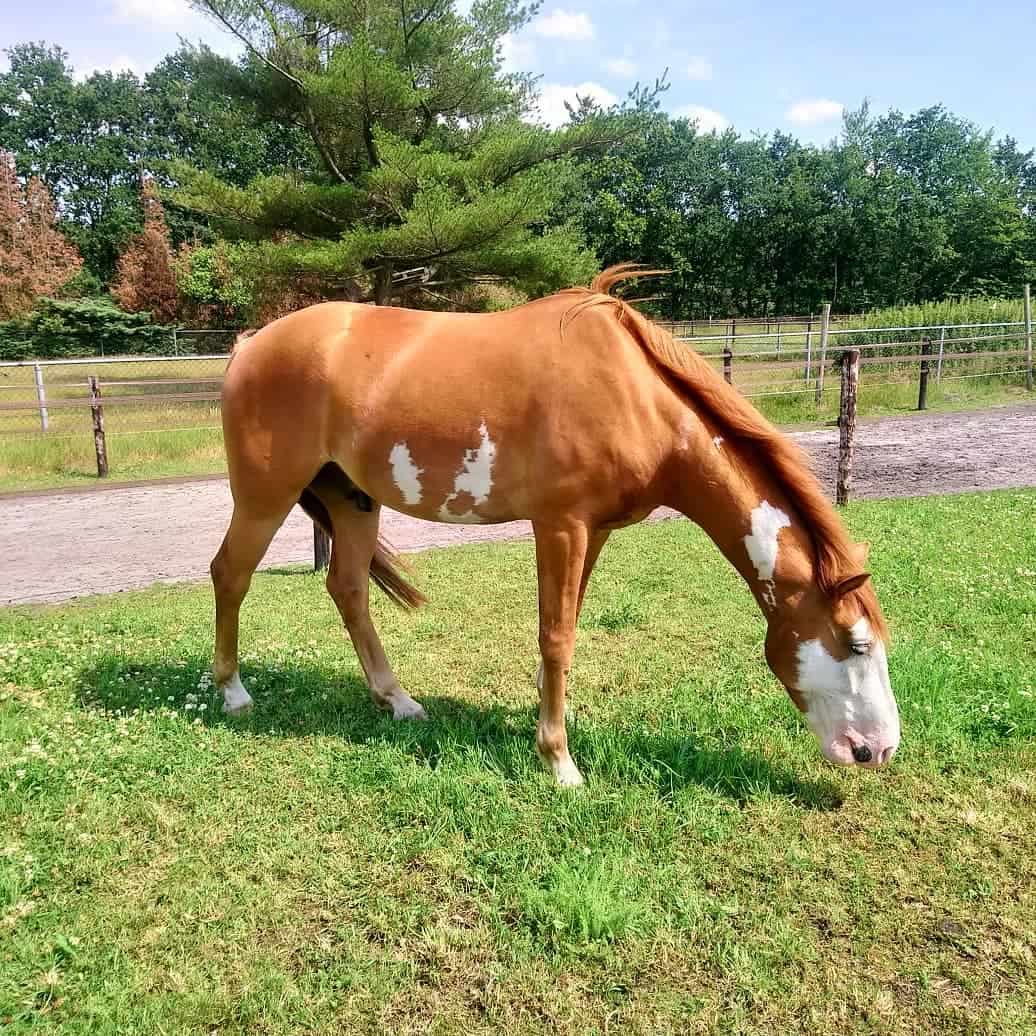 One of the most beautiful features of the horse is their unique markings. Horse markings typically refer to the presence of a light marking on an otherwise dark base color coat.  Every marking is different, and it is a reminder of each horses unique personality. Markings such as bald face, star, and strip are present from birth and do not change throughout a horses life.

Horse’s markings are commonly used as a means of identification. Your horse’s registration papers will detail each marking. Depending on the registry, you will see these noted by text or marked onto a drawing of a horse.

Facial markings are varying sizes of white, each with a specific name, depending on its size. Whether a horse has face markings is determined by their genetics. Studies have discovered that there are three genes that influence whether a horse has white markings and the extent of each marking. Different people have their own preferences for different types of horse face marking.

What is a Bald Face Horse?

Bald face, sometimes called white face markings, are the most dramatic type of horse facial marking. Officially, a bald face is a white marking that covers nearly the entire front of the horse’s face. The white often covers at least one eye and stretches down the whole front of the face, often spilling over down the sides. Like all other horse markings the   .

Bald face horses are commonly found in the American Paint horse and in other breeds that have Pinto coloring. When the horse is in the womb, pigment-producing cells, called melanocytes, determine the color of the face. When a horse carries a gene for a particular marking such as bald face  these melanocyte cells become suppressed, and the result is that a particular area of the horse is left without pigment.

However, the beauty of this unique face marking comes with some undesirable issues. Horses with this much white on their face have more pink skin on their noses and around their eyes. This means Bald Face Horses are at a higher risk of horse sunburn, so horse owners need to take extra precautions in warm and sunny conditions. Also, if this lack of pigmented area reaches into the horse’s inner ear it affects hair cells that are sensitive to sound and can cause deafness. As a result bald face horses have a significantly higher risk of being born with congenital deafness.

A star is the smallest type of face marking. It doesn’t have to look like an actual star to fit into this category. A star is found on the forehead between the eyes and is the most commonly seen marking on the face. It can be quite small, similar to the size of a large coin, or large. A star will never be so wide that it stretches fully between the eyes. Or so long that it reaches the middle of the face. Sometimes a star can be in the shape of a half moon. This particular type of marking is referred to as a crescent.

A strip can also be called a stripe or race. Like a blaze, it extends along the length of the horse’s face. However, it is much narrower. A strip is not wider than one or two inches. It can have a broken pattern. In other words, the white area can be two halves broken by the main color of the horse. This is sometimes called an interrupted stripe. A strip can be crooked and end with a pink area on the nose.

After bald face, a blaze is the most extensive white face marking. It is a wide, white stripe that covers nearly the entire front of the face. It does not go over the eyes and usually continues over the top of the nose to the upper lip. Horses with a blaze often have pink skin on their noses that is at risk of sunburn. A blaze is often very symmetrical but can be different on each side.

A snip is a small area of white, often pink, found on the nose. It is located in the space between the nostrils and varies in size. Sometimes a horse can have both a snip and a star.

A medicine hat, or war bonnet, is essentially the opposite of a blaze or strip. This is a white marking that takes up almost the entire face or the horse, with just a small amount of the horse’s color visible. This small amount of color is seen at the top of the forehead and ears. A medicine hat is usually only found in mostly white pinto horses.

Medicine hat horses have an interesting mythology associated with them. This myth comes from First Nation legends that say these horses have special powers of protection. When going into battle, the white coats of the medicine hat were decorated with special symbols. It was thought these symbols increased the horse’s protective power. Their powers are also said to help a rider find game when hunting and warn of impending danger. These horses were highly prized by tribes, who guarded them closely. Legends said that stealing another tribe’s medicine hat horse would also steal that tribe’s good luck.

A badger face is more unusual horse marking that can be described as twhen the horse has a band of their base coat color in a strip down the face which overules any other white markings. An easy way to think of it is to think of a bay horse has an almost completely white bald head except for a strip or strips of brown.

A chin spot is a white marking found on the lower lip or chin of the horse. A horse with a chin spot can also have other face markings.

An apron is an extensive white face marking, similar to a bald face. However, an apron’s largest area of white cover falls below the eye. Above the eyes, white can still be found on the forehead, but it won’t extend the full width between the eyes.

It is normal that a horse can have a combination of facial markings and not fit into any one category as described above. For example a horse could have a blaze that stops brief before restarting again. This is referred to as a interrupted blaze. Likewise a horse may have a snip and a star or some other combination of horse marking. No two combinations are alike and each individual combination is once again a reminder of the the uniqueness of every horse. 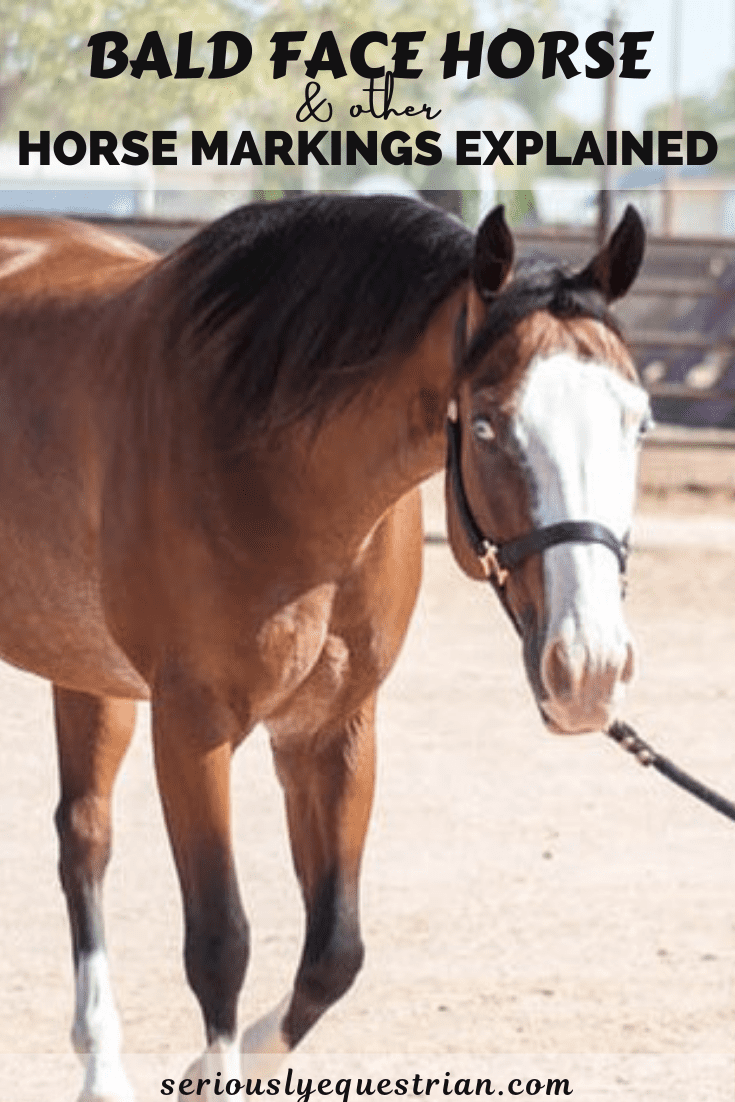