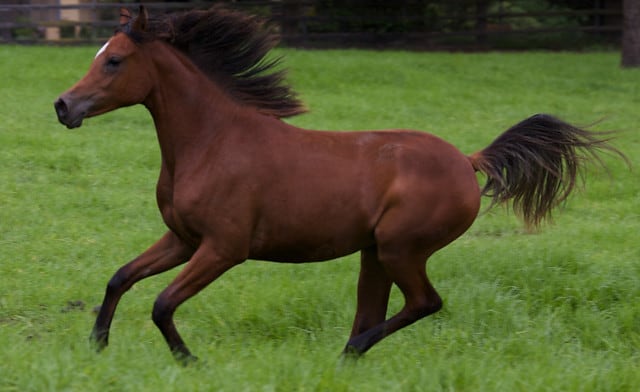 Rather like with human athletes, speed is relative to distance.  Usain Bolt before he retired was the fastest sprint runner on the planet over one hundred or two hundred meters but the story is very different for the marathon runner who is running for several hours.  So, you could say, that it is horses for courses.

To award first prize to the Thoroughbred is initially to overlook the influence of the Arab which, almost without exception, is the favored breed of the endurance riding fraternity, the equine equivalent of the marathon.

Here are the top 5 fastest horse breeds around today:

The Thoroughbred is fastest breed of horse. They are perfectly suited to for running mid-length distances. They can range from from 15.2 to 17.0 hands in height with the average one coming in around 16 hands.

Thoroughbreds typically have a build that consists of good depth of hindquarters, a lean body, and long legs. This combination makes them the ideal horse for sprinting and racing. The exact build and amount of muscle mass will usually determine whether the horse is better suited to shorter sprints or distance running.

The Thoroughbred has a hot blooded temperament which is suitable for racing. This types of temperament means that they are spirited animals who are extremely competitive. This spirited nature helps them to run faster and take risks in order to beat order horses when racing.

This horse is named based on their impressive speed over a quarter mile distance. They can travel close to 55 miles per hour at top speed at this distance. Quarter horses are a popular choice for racing, rodeo, and working ranches.

Their build consists of  a strong well-muscled body, along with a a broad chest and powerful, rounded hindquarters. This build gives them their explosive power and speed while also allowing them to perform speedy maneuvers that may be required.

There are two main body types of Quarter Horses: stock type and the hunter or racing type. Quarter horses come in nearly every color.

The Arabian is one of the oldest breeds in world. There is evidence that they were domesticated in the Middle East as far back as 4,500 years ago. They have a distinctive head and body shape and are typically 14.1 to 15.1 hands

In terms of racing they are best suited to middle to long distance events that require endurance. This is because they  have incredible stamina and have a remarkable ability to maintain a steady pace for a long distance. Their compact body with a short back, and high tail carriage is well suited to travelling long distances.

Unlike Thoroughbreds Arabians are known to be quite friendly and even tempered. Arabians have maintained close ties with humans throughout their history which makes them easy to cooperate with when riding. The versatility of the breed has made it a popular horse for breeding with other horses.

The Standardbred is an American horse that is best known for it’s use in trotting and carriage racing. They are solid, well built horses with a placid disposition. The characteristics of the breed include strong solid legs and powerful shoulders and hindquarters. This build gives them the power to pull a harness a speed for a number of miles. Their height can vary but they are typically around 14-17 hands high.

Thye may not be the fastest horse breed for short distances but over time the horse has also been used for a number of other horse events such as as show jumping, show hunter, and eventing. 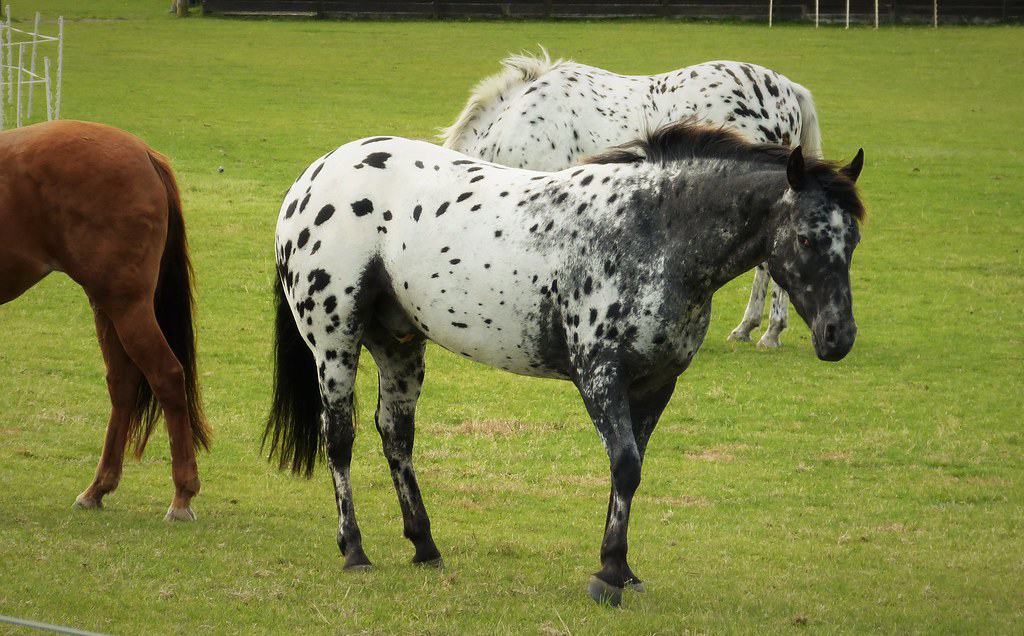 The Appaloosa horse is instantly recognizable by their colorful spotted coat. This spotting occurs  in several overlay patterns over one base coat.

They are one of the most popular breeds in the United States. Historically, this horse was used by Native  tribes for multiple purposes such as hunting, war, and travelling. This helped to refine the breed into a strong, durable horse with good speed.  Over the years Appaloosa have been bred with a number of other horses which means that there is a wide array of body types throughout the breed. They have a reputation for being fast, agile and hardy.

The horse is used for both British style and Western riding. Western events you are likely to see Appaloosas include barrel riding, roping, cutting,  and reining, . They are frequently seen in British events such as eventing, show jumping, and fox hunting.

This is definitely the Thoroughbred which of course, historically, contains Arab blood as all modern Thoroughbreds derive their ancestry from three foundation stallions imported into England from Arabia during the 17th and 18th centuries.  These are, famously, the Byerley Turk, the Darley Arabian and the Godolphin Arabian.  The Arab influence is plain to see, providing quality, speed and stamina.  Racing aficionados will recognise the illustrious names of Darley and Godolphin, two of the biggest and most influential studs and training operations in modern 21st-century Thoroughbred horse racing and breeding.  The American Quarter Horse also deserves a mention here, renowned for its speed over short distances and its ability to turn and ‘cut’ for ranching purposes.

A quick glance around the paddock at Ascot or Epsom on Derby Day will quickly illustrate the desirable form of the modern equine athlete, small, quality, with long cannon bones and a low set neck to gallop very fast.  But what if you want to gallop and jump as well?

Over smaller jump tracks called hurdles, the racehorses are not dissimilar to those on the flat, it is only when the fences get bigger and the courses get longer, think Cheltenham Gold Cup and the Grand National, that the stamp of horse changes and jump racers also tend to be a little bit older and more mature.  Most National Hunt horses or steeplechase horses are bigger than flat racers and with more bone but still retain a large proportion of Thoroughbred blood.  At the end of the day, quality will out and athleticism and speed can only really come from the Thoroughbred.

Genetics are one thing but training and performance are quite another and there is a huge wastage of Thoroughbred horses who simply don’t make the grade because they are not fast enough.  It would probably be fair to say that the industry relies on volume in order to find the real winners.  Injury takes a fair toll; running immature two and three-year-olds at the top of their game as with any sports horse doing fast work risks tendon and ligament accidents which can curtail racing life after recovery.

So what happens to all those race horses?

Rehabilitation and a new job for those that have the right head and temperament.  The UK racing industry has long been under fire about the wastage from flat racing and not doing enough to secure a future for so many horses.  Even successful horses are finished by age 4 or 5 which is when most other horses are just starting their ridden careers.

There are a number of established charities such as RoR, Retraining of Racehorses, and the HEROS charity which performs a similar function.  This is in addition to some of the major training yards which have their own rehab facilities.  There is a prestigious series of classes on the county show circuit called Racehorse to Riding Horse which is designed to showcase these horses and act as a shop window for ex-racers.

Any endurance race will be full of Arabs as the breed of horse with not just speed but incredible powers of stamina inherited from their desert ancestry.  On the international scene, the Arab is a breed apart, with a lean muscular frame perfectly suited to travelling long distances.

Horses race on dirt tracks mainly in America, all-weather surfaces and grass.  Each of these has a distinct bearing on speed, a bit like how the type of court surface can influence how a tennis ball behaves.  And there is grass and grass.  Subject to the elements of weather, the state of the ground or ‘going’ as it is referred to can reduce times and each horse has his own preference, whether he likes the going soft or good to firm.

Your horse doesn’t have to be fast to race

At opposing ends of the spectrum, there has long been a Shetland Pony Grand National race series with a final at the Christmas horse show at Olympia, the London International Horse Show.  This is a fundraiser primarily for Great Ormond Street Hospital but the heats are hotly contested and racing Shetlands have been known to attract premium prices.

From small to tall, a more recent development is heavy horse racing which some UK racecourses have been featuring on their race cards.  Sounds a bit counter-intuitive to race these giants but there is a big move afoot to promote the heavy breeds like the Shire and the Suffolk Punch, in serious peril due to falling numbers according to the Rare Breeds Survival Trust. So, it really is true, any horse can race! 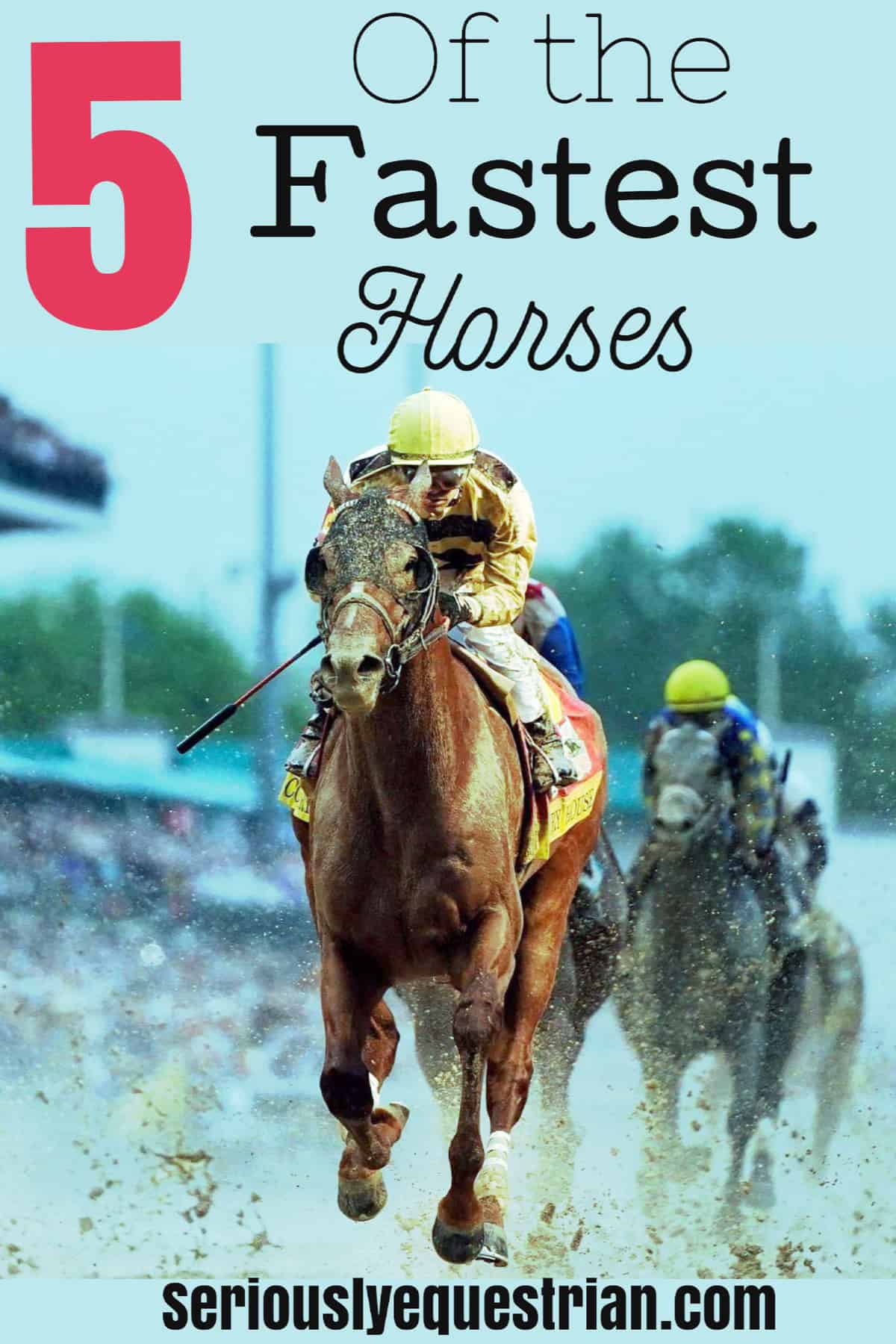