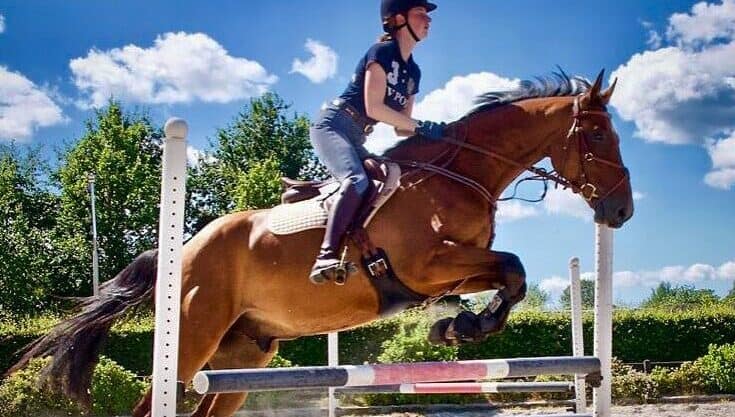 Most horses are capable of jumping a small jump. But when it comes to needing a horse to participate in jumping regularly, it is best to look at specific breeds. Modern jumping horses have developed over decades of careful breeding. Within certain breeds, there can be a difference in those bred for jumping and other disciplines, such as dressage. In our opinion here are some of the Best Horse breeds for jumping.

The Irish Sport Horse has long been a popular choice for a variety of disciplines. They excel at eventing in particular where they led the World Breeding Federation for Sport Horses for eventing from 2012 – 2016. Today, they still rank highly.

Note that any horse with a full pedigree of breeding and registered with Sport Horse Ireland is called an Irish Sport Horse. However, this is not the type we’re talking about here. A true Irish Sport horse is a mixture of Irish Draught and thoroughbred. In the Irish studbook, they are identified as TIH – traditional Irish horse.

They make wonderful horses for all levels of competition and are a good choice for novice riders. The breed is known for its soundness, bravery, and sensible mind. You don’t have to go to Ireland to buy an Irish Sport Horse. There are breeders in the US and other countries who breed from traditional Irish lines.

The most famous Irish Sport Horses are Boomerang, who won the coveted Hickstead Derby four times, and Cruising, who won some of show jumping’s most prestigious events. Cruising also became one of the most influential Irish sires from the 1990s – 2000s.

Characteristics : Range from 15.2 – over 17 hands. They come in bay, black, chestnut, and grey, with white markings common. A cooperative personality is essential. They are also long-legged and have expressive heads with a rectangular body frame.

About : The Dutch Warmblood or KWPN is perhaps the best-known jumping breed. KWPN has been carefully refining the breed for jumping over decades. They consistently rank number one in the World Breeding Federation for Sport Horses in show jumping. The KWPN studbook has some of the strictest criteria of all studbooks for grading horses for breeding. It ensures that undesirable traits, such as bad temperament, or OCD are kept out of the breed.

One of the most famous Dutch Warmbloods is Big Star, winner of the individual Olympic gold medal in Rio 2016.

Characteristics – Range from 15.1 – over 17 hands. Since the Belgian Warmblood was created by mixing a variety of European breeds, they are characterized more by their purpose than features.

About : The development of the Belgian Warmblood began a bit later than other jumping breeds in Europe, but they have quickly caught up. It was developed by bringing in jumping horses from other European breeds, such as the Holstein and Selle Francais, instead of crossing outside genetics with a traditional heavy Belgian horse.

Perhaps the most famous Belgian Warmblood is the legendary Big Ben, who represented Canada under the expert hands of Ian Miller. Big Ben is one of the most successful showjumpers in history, winning the World Cup showjumping championships two years in a row.

Characteristics : Range from 15.2 – 17 hands. They tend to have a heavy, arched neck, powerful hindquarters, elastic gaits, and an intelligent eye. Most are dark bay, but they can be chestnut, black, and grey. White markings are not preferred or common.

About : Like the Dutch, Germany takes its breeding of jumping horses seriously. The Holsteiner originated in the northern Germany region of Schleswig-Holstein and is one of the oldest warmblood breeds in the world, tracing back over 700 years. They tend to be a bit heavier and muscular than other warmbloods making them incredibly powerful jumpers.

The most important stallion in relatively modern Holstein jumping breeding is Cor de la Bryére, a Selle Francais. He is responsible for transforming the breed into the high-level capabilities of today’s jumping horses. Unlike the Dutch Warmblood, where you’ll find horses with lots of chrome, the Holstein studbook has a preference for breeding mainly dark, colored horses with minimal white.

The temperament of the Holstein can vary widely. Certain lines are known for having amateur friendly minds, such as those coming from the stallion Capitol. This range of temperaments means riders of different levels can find a good jumping horse to suit their needs. They are widely used in show jumping, eventing, American hunters, and equitation.

Contender is one of the most influential Holstein stallions, having bred an impressive 80 licensed sons and numerous premium mares. And of course, you can’t leave out Capital, whose sons and daughters have won more money combined than any other showjumping stallion. The recently retired Casall Ask is one of Holstein’s most recent superstars.

Characteristics : Range from 15.3 – 17.3 hands. Athletic with powerful gaits and hindquarters, a long, strong neck, and a broad forehead. They are usually bay or chestnut and often have white markings.

About : The Sell Francais is the main breed of jumping horses from France. It has developed from a variety of different breeds, including the thoroughbred, French trotter, Anglo-Arab, and native French horses. The vast majority of Selle Francais breeding takes place in Normandy, northern France due to the breed’s ties with the native Norman horses.

Today, they are bred as purely sport horses and excel in a variety of disciplines. The stallion Alme Z is one of the most influential modern foundation jumping stallions for Selle Francais as well as other European jumping breeds. Without Alme Z there would have been no Jalisco B, Galoubet A, Baloubet du Rouet, and Quidam de Revel. Some feel Alme’s influence on jumping horses is equivalent to Northern Dancer’s on racehorses.

Characteristics : Ideally they should stand between 15.2 – 16.3 hands tall. The Irish Draught is versatile, strong with good bone, brave, and has short cannon bones. They have a kind eye, a pleasant head, a wide forehead, and a powerful neck. You will find them in bay, chestnut, grey, black and dun colors. White markings are not preferred.

While they are unlikely to be found jumping Grand Prixs, they are perfect if you want a quieter horse that is forgiving to learn on and can get you out of a sticky spot. Because of their heavier build and sure-footedness, they make excellent hunting horses and suit a bigger rider.

The most famous Irish Draughts to have a huge impact on jumping horses are Clover Hill, King of Diamonds, Grange Bouncer, and Sea Crest. Sea Crest is the sire of the legendary Irish Sport Horse Cruising and jumped to a high level himself. Clover Hill is present in the pedigree of close to a third of all modern Irish Sport Horses. King of Diamonds is responsible for siring several top show jumpers including, Mill Pearl and Special Envoy.

While some of the best breeds for jumping horses are covered here, it isn’t a definitive list. Europe has several smaller studbooks that also breed exceptional jumping horses. These include Oldenburg, Trakehner, and Hanoverian.

Never discount a pure thoroughbred, many have jumping talent, such as the legendary Touch of Class, who won Olympic gold and stood barely 16 hands. The American Quarter Horse and the Appolooase can also show a talent for jumping despite often being overlooked for this type of work. Finally, never discount any breed for jumping, there are always exceptions, especially for novice and intermediate level riders. 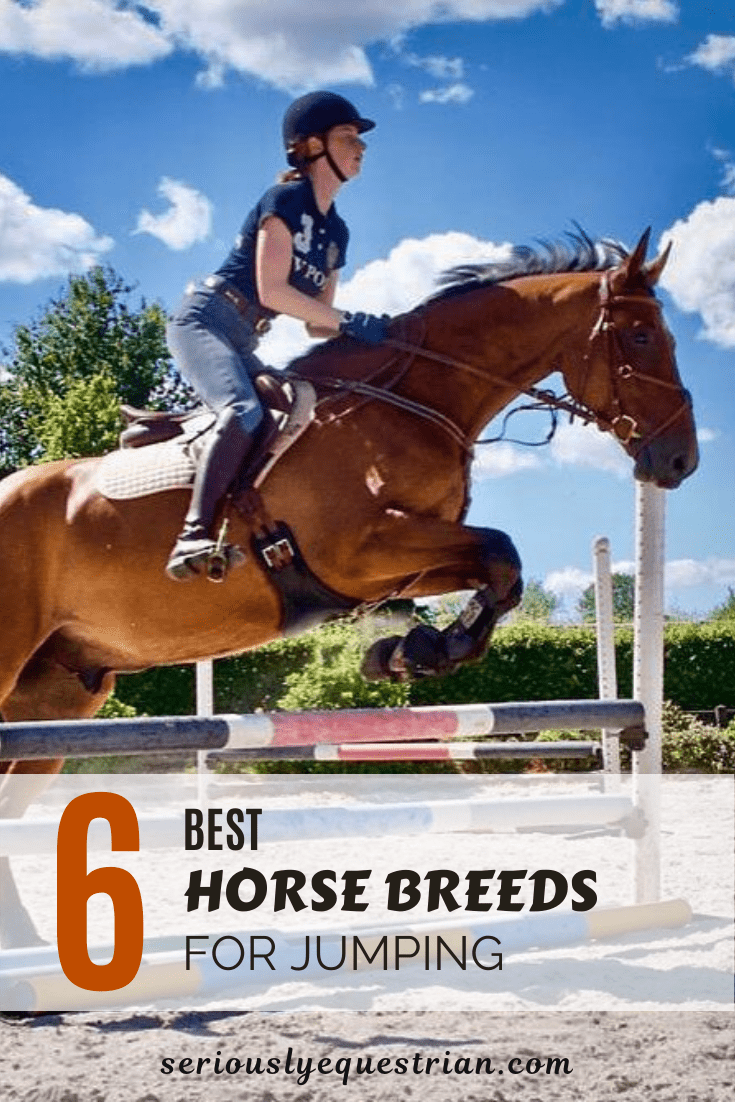