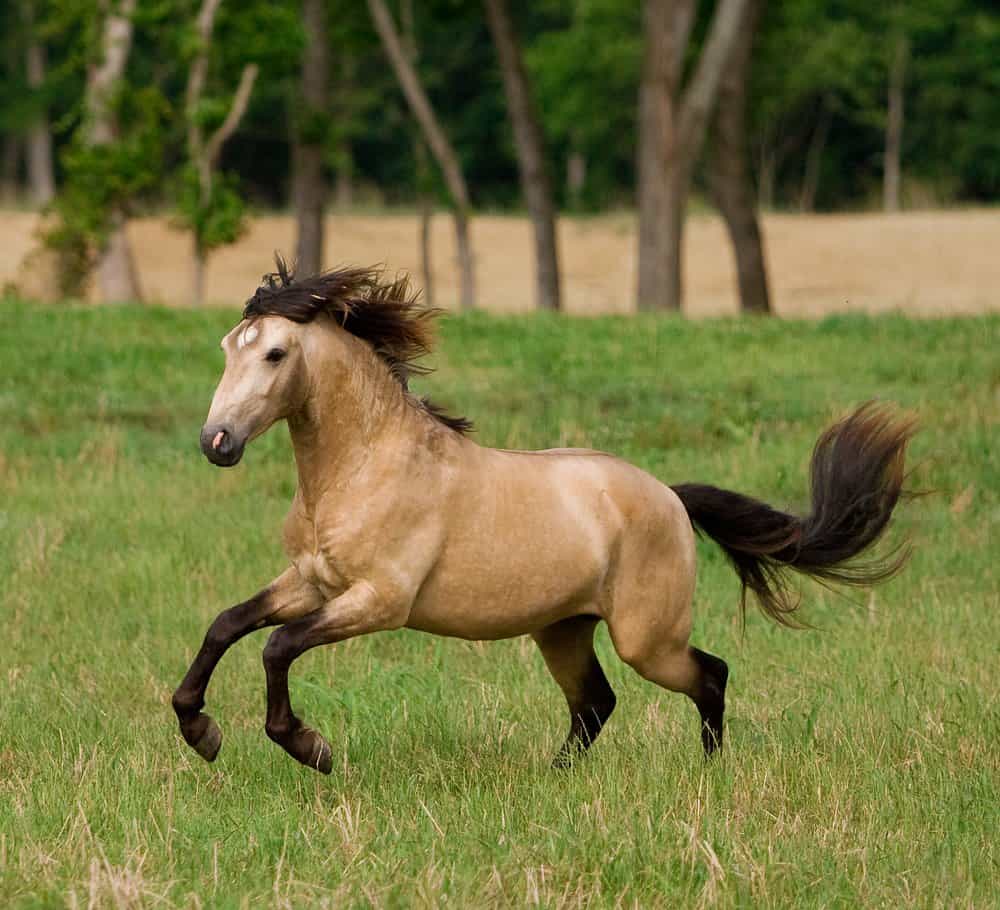 According to a study by the Swedish University of Agricultural Science, there are over 700 horse breeds out there, that’s why it’s probably extremely hard for any ordinary person to even know half of them by name.

Actually, most equine experts only recognize about 200 horse breeds, so many horse breeds end up being forgotten or just disregarded because they’re not “special enough”. But we’re surely more interested in horse colors, markings and genes.

Which is why in this article we decided to take a closer look at Buckskin horses, who might just have one of the most beautiful horse genes that you will ever come across.

While not technically a breed itself, the Buckskin gene is absolutely fascinating and it surely deserves a lot more attention and recognition than it gets.

So, for today let’s just go through everything that makes Buckskin horses special, starting off with their interesting and extremely rich history:

It is believed that they come from some type of primitive Sorraia horse breed, which may sound like a super detailed origin story but keep in mind that most of today’s horse breeds have been influenced in one way or another by Sorraia genes.

But anyway, what we know for sure is that the Sorraia horses made their way to North America back in the 1500s, courtesy of the Spanish conquistadors that decided to sell them off as pack animals.

This was the perfect job for the Sorraia horses since they were exceptionally hardy and they didn’t really require a lot to be safe and healthy, making them amongst the best options at the time.

As soon as they made their way there though, some horses were released into the wild, pretty much causing a multitude of mix and matching to happen around the wild west with every other horse breed around.

The most popular crossbreeding that happened here was known as the western buckskins, as they became extremely useful as western workhorses.

They maintained their hardiness and soundness, making them the perfect horses around at the time. You can see this portrayed in most western movies where cowboys love to ride around on their Buckskins around the city hall.

As the years went by their popularity definitely dwindled about quite a lot, although it would be wrong to say that they’re unpopular these days.

Buckskins are considered to be perfect for most jobs, and while they don’t excel in any category per se, they make for a great all-around option which is very sought after these days.

As such, if you want to get your hands on a good horse that will help you no matter the job, you can always rely on a good old Buckskin to get it done.

One of the most easily recognizable traits of the Buckskin horse is always going to be the unique buckskin makeup, which is all due to a single cream dilution gene.

In simple terms, all that you need in order to get a buckskin coat is you need a cream dilution gene to be inserted into an otherwise bay horse.

Bay horses are known for having a brown coat, which is why when you give them the cream dilution gene it leads to their offspring having a tan color and a black base coat gene, which is also known as the agouti gene. This in turn restricts the black coat to the tail, mane and leg points.

This is where the cream dilution gene comes in to play, as it lightens up the bay to tan, while also keeping the black points around.

So, this is why when you see a true buckskin horse you will notice that they still have those black points around them. If you do end up purchasing a buckskin and they have solidly tan features, then that means you’re not dealing with a rue buckskin after all and you should contact your breeder in that case.

So, just to reiterate, if you want a buckskin foal, you will need one of the parents to have that cream dilution gene.

Interestingly enough though, not all of the buckskin horses carry the cream gene in them, so you may want to properly assess this before starting the breeding process.

If you do want to maximize your chances of your horse ending up with buckskin foals though you will definitely want to go with a Mustang, a Quarter Horse, a Morgan or a Tennessee Walking Horse since these are by far the most common breeds to carry the cream gene.

How to Assess a Buckskin’s Genetic Makeup

Thanks to advanced coat color testing, horse lovers all around the world can now 100% verify their horse’s true color with ease.

You can instantly tell if you’re dealing with a true buckskin horse for example, if it has one of the following results on an equine coat color test.

Since buckskin horses only need one cream gene you will not see two Cr genes intertwined. So, with that being said, here is the actual Buckskin genetic makeup that you need to look out for:

There are five main buckskin colors that you can look out for, and they are the following:

The buttermilk variety is by far the lightest colored buckskin coat around, and as you can probably tell by now, similarly to any other buckskin horse out there, it too will have its dark points around.

Interestingly enough though, not all buttermilks look the same, as some of them can be much lighter than you think, while others can bear a darker shade across their bodies.

The dusty buckskin variety is known as the lighter version of a sooty horse, but it does feature a standard coloring and no definitive dorsal stripes which makes it stand out a bit.

Sooties on the other hand are known to look very similar to duns, but they are for certain buckskins through and through.

These horses have the cream dilution gene alongside the bay genes, but what makes it different than the rest is the fact that this variety actually looks like someone just threw soot all over him.

This gives us that strange impression that the horse is way darker at the top and lighter underneath. This variety is also the darkest one that you can come across.

The standard buckskin is one of the hardest ones to classify as well, since they vary a lot one from the other. One thing that we can say about this variety is that it does usually appear to have a coat color similar to a deer. You can see this in the picture below for example.

Silver buckskins are the last major variety that you’ll see, and as the name implies, these horses usually have light gray hairs intermingled all across their coats.

Many horse owners go through their whole lives believing that they are dealing with gray horses, when in fact they’re actually buckskins after all.

They are the lightest-colored of this color breed and are known for looking like gray horses with a shiny overcoat on top.

The Buckskin vs. Dun Gene Differences

Upon looking at these two horse types, most people would think that they are all the same, so they use these terms interchangeably between one another.

What many people don’t realize though is that there are some key differences between the two, with most of them coming down to the genetics.

First of all, we should mention the similarity between the two, which is the fact that they do look very similar to one another. As you you’ll see, both of them have golden tan coats, and while they’re not exactly the same, they are very alike.

This is because both the buckskins and the duns are the result of a dilution gene taking its toll on a bay horse, but the reason why they’re not exactly the same, genetically speaking, is the fact that they d carry out different dilution genes.

As such, buckskins can definitely range from pale yellow to deep gold, but they are only really considered to be true buckskins when their coat is the color of tanned deerskin.

They will not have any sort of stripes alongside their bodies, instead they will have black points in their manes, tails and they will always have solid black legs.

Duns on the other hand are a lot lighter, with their coats having a lighter yellow to reddish-brown color scheme.

Their legs are also a lo darker than the rest of their bodies and they will always have primitive markings running across their bodies. The most commonly found one is the dorsal stripe or the dark line, that can be seen running down their back all the way to their tail.

Other than that, dun horses also have plenty of other stripes along their shoulders, lower legs and foreheads, and not only that but they can also be found outside of the bay horse gene pool.

While buckskins can have a dorsal stripe, it is always going to be the result of countershading, as opposed to it being a sign of the Dun gene.

You can also get dunskin horses every now and then, which overcomplicates things. This essentially means that the buckskin base has now been changed by the dun gene.

There are a ton of “false” duns out there, but for now we will just say that these are the main differences between the Dun horses and the Buckskins.

Here is a quick rundown of fun facts that you should know about the buckskin horse:

Breeds That Can’t Have the Buckskin Gene

There are a ton of different Buckskin horses around, but did you know that there are plenty of horse breeds that actually can’t have this gene to begin with? They are the following:

So, what did we learn today? First and foremost, we learned the fact that buckskin horses are not a breed, they are a type of horse that can be found across multiple different horse breeds, such as the palomino and dun genes.

For the most part, you can tell if you’re dealing with a buckskin horse simply due to the fact that they will always have beautiful golden coats, alongside several black spots across their bodies.

One thing that we didn’t mention before is the fact that Buckskin horses tend to have a big personality, they are very friendly and they’re known for being especially good workers. On top of that, they are also very famous for their contribution to the Hollywood Western Cinema.

So, whenever you watch another western flick, how about you keep your eyes peeled to see if you can spot the horse type that the riders are perusing around on? We can bet the fact that they will surely be golden coated with black spots across their bodies, and that’s a fact.